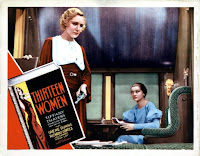 Thirteen Women is a creepy terrific little pre-code film from 1932 featuring great performances from Irene Dunne, Kay Johnson, Jill Esmond, and more. Myrna Loy gives a standout performance in the vengeful role of Ursula. In many ways, Thirteen Women is a precursor to Mean Girls and even Heathers and the slasher film genre (one of my personal favorites).

Based on a novel by Tiffany Thayer (which I haven't read but want to), the film is a fascinating (and very rare) glimpse into the mind of a female murderer, a woman who is hellbent on retribution. Of note, is the exploration of racism as a theme, something uncommon in films of this era and definitely ahead of its time. For some reason, the studio (in this case RKO) cut the film down from 73 minutes to 59 minutes, omitting a handful of performances/actors from the film in the process. I don't know if the original version is available or has ever been released, but it would be great to see. Sadly, supporting actress Peg Entwistle committed suicide by jumping off the Hollywood sign a month before the premiere of this film.

Welcome to the official website for author and poet Wren Valentino.