Why Black Christmas is a Great Horror Film 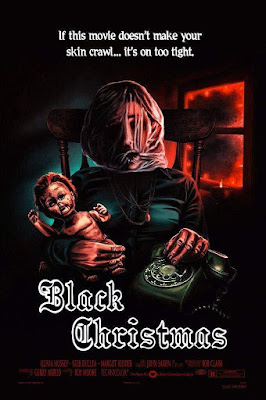 Black Christmas. Just the title alone brings a smile to my face.

I first discovered this gem of a movie a couple of years back, thanks to Shudder. Since then, I've come to refer to the film as one of the best of its kind.

I knew little about the movie prior to my first viewing. I'd heard it was a tremendous influence on John Carpenter's Halloween (arguably one of the best slasher films ever made, if not one of the best films in the entire horror genre) and I knew the film was produced in Canada, much like another slasher film I love called Curtains (1983). Other than that, I watched it without knowing much about it or its longstanding legacy.

From the first time I watched Black Christmas (and in my annual viewing of the film every December 1 since), I immediately saw the reasons behind it's well-earned cult following. From it's innovative cinematography to it's all-too creepy score to its breaking of genre rules and expectations (the twist on the Final Girl trope here feels like a Hitchcockian inspired ending), this movie demands your attention. This is not just a film; it's a cinematic trend setter. The film is rich with what would soon become the usual standard fare for slasher films: creepy phone calls, multiple suspects, creative ways of killing, women in jeopardy, a dark night, and, of course, it's all centered around a holiday. The entire thing feels like a fantastic tribute to the Italian giallo films, clearly an influence on the deft director Bob Clark.

Critics were very mixed over the film when it was first released. Variety panned it. The New York Times hated it. Even Gene Siskel gave it a less-than-favorable review. Yet, today this groundbreaking film has a cult following to be rivaled and envied. Frequently it's at the top of the list of horror filmmakers who cite its influence on their own work. It has stood the test of time and still holds up well against today's releases. IndieWire, Bravo, and Esquire have all included it on their lists of best horror films ever made.

Despite the reaction to the film when it was first released back in 1974, today it serves audiences well, not only for its historical contributions to the horror genre, but because it's a truly terrifying film.
at December 23, 2019