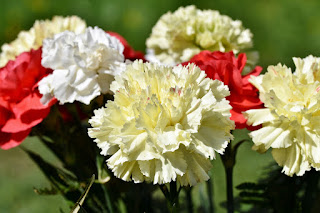 There is no greater joy than cleaning my home office. Okay, so maybe that isn't completely true (I can think of many other great joys including being handed a box of white chocolate and a bouquet of carnations, just to name two), but there's something about having a clean space that allows my creativity to flourish. I'm happy to say my home office has never been so clean and the creativity levels have been reaching record highs. It's been quite a month. I don't know about you, but I'm exhausted. Happy and grateful and blessed, but tired. 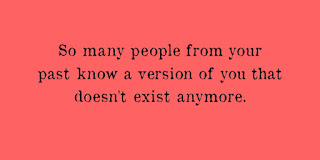 Real talk: I'm turning 50 in less than a month. In stereotypical midlife crisis fashion, I've been rethinking every choice ever made up to this point, forgiving myself for some things and assuming full responsibility for others. I've also been very reflective. 2015 and 2016 were two of the worst years of my life - truly awful. As a result, I was a pretty terrible person during that time. To tell you the truth, I'm surprised I'm still here - especially after those two hellacious years. I had a considerable amount of tragedies and sadness in my life then. Like a ton of insane stuff that I'm still trying to make sense of (not sure if I ever will). I lost people I loved. I reached a point where I loathed myself. Let me tell you, trauma in all shapes and forms is hard to process - no matter how many years have passed since the trauma(s) occurred. I've been working hard since 2016 on a whole lot of healing (way easier said than done) and, while I'm not yet where I want to be as a person, I'm getting there. I'm also allowing myself to take whatever amount of time I need to heal. It might take forever. It might not. 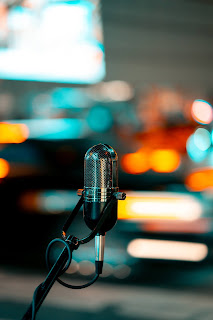 I want to preface this next section of this update with the acknowledgement that there are far greater things going on in the world than what I'm about to share with you.

It's been over 20 years since I took an acting class and a little less than that since I was last on a stage. With my 50th birthday around the corner, I've been pushing myself to jump out of my comfort zone and start pursuing passions that have always spoken to me, yet life never allowed me to do.

A few weeks ago, I signed up for a virtual Animation Voice Improv workshop instructed by a very accomplished actor. I did this because I have always wanted to be a voice actor, specifically in animation. In fact, it's a dream of mine.

As the workshop grew closer, I started to second guess myself. I started to doubt my abilities and tried to convince myself not to go. I came up with a zillion reasons, i.e. I'm too old, I'm too this, I'm too that. Basically, I convinced myself that I completely sucked and had no right to be a part of the class, let alone the entertainment industry.

Thankfully, I have some really wonderful people in my life and by being friends with them I have their support - not just on a personal level, but through the resources they've written and created. Case in point, I turned to The Inner Critic (written by my wonderful friend Andrea Patten). I opened the book and the first passage I randomly read was exactly what I needed to see/read.

Still, the anxiety was there. It was still there even seconds before the class started. The fears, the doubts, the resistance to vulnerability - all there! But I did the class anyway. I hung in there for the three hours and gave it my all.

Within the first few minutes I no longer felt self conscious. That doubt I felt started to dissipate and I gave myself permission to have a good time.

I received terrific and very encouraging feedback from the instructor, made some new friends, and signed up for another class. I learned a lot - and not just about improv, animation, and voice acting.

I'm sharing this because I know someone reading this might be able to relate someway, somehow. It's true that we can really be our own worst enemy. I can tell you now I am very glad I didn't give in to fear and that inner critic. The feeling of accomplishment is well worth it. As a result, I feel like I have discovered something I really love and enjoy doing.

I have no idea where this new road will take me, but I'm all in. It's exciting and scary. But, game on. Fears and all. 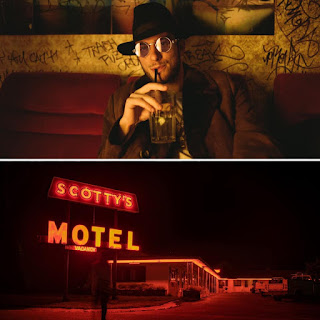 Okay, time for some poetry. I have four new poems to share with you this month.

You can read my new poems Strange Comfort and La Notte here. Both are featured in the digital publication Disquiet Arts. La Notte is a personal new favorite of mine. I hope you like it.

You can read my new poem Smart Boy here. It's featured in the Summer 2020 issue of Wicked Gay Ways.

You can read my new poem Fishbowl here. It's featured in the online version of Atomic Flyswatter. 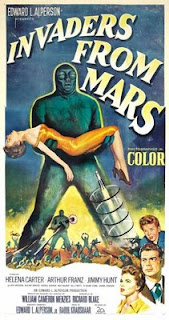 Anyone who knows me knows how much I love B movies - especially science fiction films from the 50's and 60's (Roger Corman was a movie making genius). This month, I watched a ton of them (thank you in part to Tubi), including The Mole People, The Giant Claw, Phantom from Space, Battle in Outer Space, The Beast from 20,000 Fathoms, Giant from the Unknown, Attack of the Crab Monsters, The Undead, Teenage Zombies, and a new personal favorite, Invaders from Mars. There's much to love about Invaders from Mars, a story told from the perspective of a young boy that nobody believes. It's over-the-top, fun, and definitely one to watch. 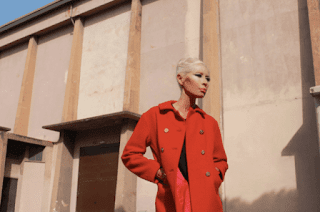 Some wonderful music to share with you. Wendy James (the former lead singer of one of my all-time favorite bands Transvision Vamp) has a fantastic new album out called Queen High Straight. Here's a video for one of the killer tracks. Awesome stuff. I'm also loving the song Rendezvous by Miss Benny (the song came out almost two years ago but thanks to Love, Victor, I just discovered it) and the awesome dance track In Your Eyes from Robin Schulz (featuring Aida).

Thank you for reading this update! I appreciate you being here. I hope you're staying happy, healthy, and safe.

My new poem Fishbowl is featured in the online version of Atomic Flyswatter. Thank you to the editors for giving this poem a terrific literary home.
at July 09, 2020 No comments: 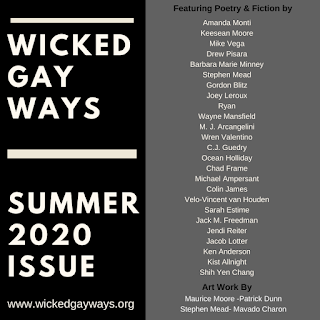 My new poem Smart Boy is featured in the Summer 2020 issue of Wicked Gay Ways. Many thanks to them for giving this poem such an awesome literary home. 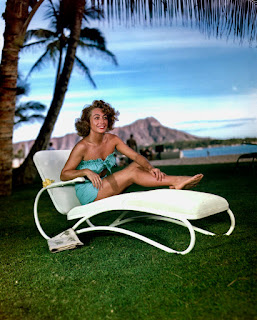 Life Stuff
Welcome to something new. Moving forward, I will be posting monthly updates here, covering a range of topics from life stuff to publishing news to what I'm watching. I plan to post an update on the first of every month.

Like many people, I've been working from home since mid-March. I might be in the minority, but I've enjoyed it. Not only do I feel safer (we rarely go out), my productivity is through the roof. I now get more accomplished with my day job than I ever did in my actual office. Also, my house has never been so clean. With that said, life does feel like it's stuck on repeat. I'm not sure what the future holds, but for now I'm taking one day (if not hour) at a time.

I love summer. I used to really love fall, but summer has become my official favorite season. Even though I live in Colorado, I hate snow. I always say, "Every day without snow is a blessing." I love the relaxed vibe of summer and the youthful feeling it exudes. Summer just feels like fun. I'm enjoying every second of it. 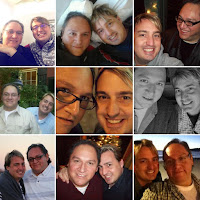 Edward and I recently celebrated our 10-year anniversary. It has been a wonderful decade of laughter, learning, and lots of love. We’re looking forward to spending many more years together.

Publishing News
In case you haven't heard, I have a new novelette out. Here's some more info about Fast Beat: 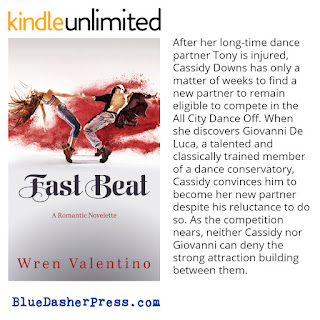 You can read my new poem Thresholds here. The poem was selected for the My Front Door poetry series by Silver Birch Press.

You can read my new poem Cherry Drop here. The poem is featured in the current issue of Halfway Down the Stairs.

What I'm Watching
I recently became obsessed with Barbara Stanwyck. This month I watched her in the very charming comedy The Bride Wore Boots. I also loved Joan Crawford in the film Harriet Craig. 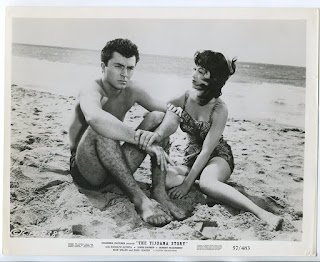 On the film noir side of things, I watched The Case Against Brooklyn (which wasn't very memorable), The Tijuana Story (starring a very beautiful young James Darren; I'll watch anything with him in it), Black Angel (featuring a great performance from June Vincent), and The Blue Dahlia (starring a stunning Veronica Lake who is mesmerizing in every scene she appears in), which has quickly become a new personal favorite.

Rita Hayworth broke my heart (again) in Miss Sadie Thompson. It's well worth a watch, but sad.

On the lighter side, I watched the pretty scandalous (for it's time) Tarzan and His Mate and really loved Neptune's Daughter (with the always-wonderful Esther Williams and the fantastic Betty Garrett, who steals every scene she's in). I recently bought a 10-film Ma and Pa Kettle film collection. I watched the first film in the collection, The Egg and I, starring the wonderful Claudette Colbert (I'm a huge fan). 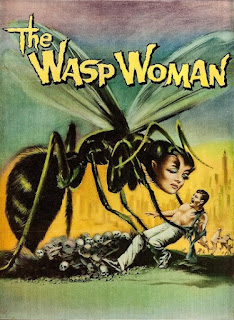 On the fun side, I loved the cult B movie The Wasp Woman. This was the second time I've watched the film and I enjoyed it even more than the first. The real-life story of lead actress Susan Cabot is a heartbreaking, bizarre tale. Well worth reading about it if tragedies are your thing. 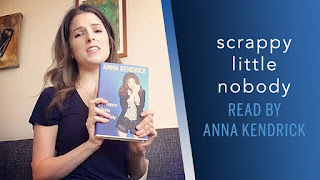 What I'm Reading
I'm halfway through Anna Kendrick's wonderful memoir Scrappy Little Nobody and I love it. I've lost count how many times I've laughed out loud while reading it. I highly recommend it. 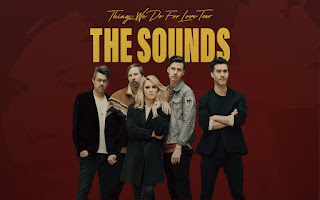 What I'm Listening To
The Sounds, one of my favorite bands, have a new album out titled Things We Do for Love and it's fantastic. Truly one of their best albums. They were supposed to tour earlier this year. I hear it's being rescheduled, which makes me very happy. I saw them play years ago in a small club in Atlanta and I've wanted to see them perform again since then. If you like punk pop, this album is for you. Check out a live performance of one of the songs from the album, Hollow.

Thank you for reading this update! I appreciate you being here. I hope you're staying happy, healthy, and safe.

My new poem Cherry Drop is featured in the current issue of Halfway Down the Stairs. Many thanks to them for giving this poem such a terrific literary home.
at June 03, 2020 No comments:

Email ThisBlogThis!Share to TwitterShare to FacebookShare to Pinterest
Labels: 1970's, Cherry Drop, child of the 70's, childhood, Halfway Down the Stairs, life in the 1970's, memoir, memories, playground, poems, poems about growing up, poems about the 1970's, poetry, recess, Wren Valentino

I am pleased to announce the publication of my romantic novelette Fast Beat, now available from Blue Dasher Press.
at May 28, 2020 No comments:

June 1 Momma Says: To Read or Not to Read

June 3 3 Partners in Shopping, Nana, Mommy, and Sissy, Too!